It was an eventful day during the cultural event organized at Victoria Memorial to mark the 125th birth anniversary of Netaji Subhash Chandra Bose. The rather simple image of PM Modi and CM Mamata sitting together, trying to ignore other’s presence is now trending as the picture of the day.

Chief Minister Mamata Banerjee and PM Modi were seen sitting together for a long time during PM Modi’s visit to Bengal on Saturday to mark the event. What was interesting is that there was no conversation between the two during this entire time.

Both the leaders took part in multiple events in West Bengal’s Kolkata in a bid to host the biggest celebration of Subhas Chandra Bose’s birth anniversary even as a clash between BJP and TMC workers earlier in the day left several injured in Howrah.

Upset Mamata did not deliver her speech

The Chief Minister of West Bengal, Mamata Banerjee did not deliver her speech protesting the ‘Jai Shree Ram’ slogans being raised when she was invited as a speaker on the podium.

The anchor seemed to persuade the crowd to keep silent as she took the stage. But it was not a normal speech.

Mamta seemed agitated and said “government programme should have some dignity” and it “is not fair to insult somebody whom you have invited”.

Notably, the event was presided over by Prime Minister Narendra Modi. ‘Jair Sri Ram’ as the universal phrase for praising Lord Rama is associated with his Hindu Nationalist Party, BJP. West Bengal assembly elections are coming up and so are the political overtone and claims over the legacy of Subhash Chandra Bose.

In her brief remarks, a visibly upset Mamata Banerjee said it was a government program and not that of a political party.

The Trinamool Congress leader also said that she was grateful to the Prime Minister and Cultural Ministry for organising the event at Kolkata.

She further added, “I am grateful to the Prime Minister, Culture Ministry for organizing an event in Kolkata. But this is not fair to insult someone whom you have invited. In protest, I am not going to speak anything. Jai Hind, Jai Bangla,”.

Election Commission has told India Today TV that the West Bengal Assembly election might be held early due to school exams and the poll panel is likely to announce the election schedule in the first week of February. 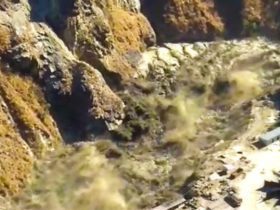