Indian geography is one of the most diverse in the world. It is also home to some of the unique geographical phenomenon that will surprise you. Marine fossils can be found in the Himalayas, at some of the highest points on earth! That too at extreme hights.

Let’s have a look at such mind-blowing facts about Indian geography that you don’t know about.

1. Aravalli Range is the oldest surviving geological feature anywhere in the world

Not many know this interesting fact about Indian Geography. Aravalli Range in India is the oldest surviving geological feature in the world! Aravalli range was once as tall as Himalayas! However, over hundreds of millions of years, they have been eroded down to low hills and ridges.

The northernmost point of the Aravallis is the North Ridge near Delhi University. Farther south, near the Gujarat-Rajasthan border, these short hills turn into mountains again.

The Guru Shikhar peak at Mount Abu rises to 1722 meters above sea level and is considered to be a sacred place.

The Rajput warrior clans claim that their ancestors arose from a great sacrificial fire on this mountain! Despite the significance of the Aravallis, they are under threat today because of reckless mining and quarrying.

2. The Himalayas Were Once Under the Sea

The Himalayan range which boasts of some of the highest points on the planet has not been the same during ancient times.

What we see now the towering Himalayan mountains were once under the sea. This is why marine fossils are commonly found high up in the range. The Himalayas were once underwater, in an ocean called the Tethys Ocean.

Both the Himalayan mountain range and Tibetan plateau have formed as a result of the collision between the Indian Plate and Eurasian Plate which began 50 million years ago and continues today.

225 million years ago (Ma) India was a large island situated off the Australian coast and separated from Asia by the Tethys Ocean.

3. India A Land Of Volcanic Ash

Was it the eruption of the Toba volcano in Sumatra 74,000 years ago that led to the extinction of the pre-modern hominids of Asia?

Excavations have shown that peninsular India was covered in volcanic ash from the eruptions. Experts still disagree on what really happened because of these eruptions but it’s possible that they led to the disappearance of the pre-modern hominids, clearing the way for the modern humans.

3. Ostriches Were Found In India

We all know ostriches are native to Africa. However, there were once ostriches thriving in the Indian subcontinent!

Archaeologists have found beads and ornaments made from ostrich eggshells in Stone Age sites. Was it the Stone Age fashion industry that led to the disappearance of the bird?

In Indian mythology, one of the ten avatars of Vishnu, the Protector, is that of the fish. It is said that Vishnu took the form of a fish (Matsya) and warned Manu, the legendary king, about a great flood that would threaten all life.

Manu built a large ship and filled it with seeds and animals. Matsya then towed the ship to safety. Doesn’t this remind of you of Noah’s Ark? Are these legends a memory of the ancient floods?

5. King Manu Was The Ruler of Dravidians

Manu, the Indian Noah, was said to have been the king of the Dravidians before the flood but is repeatedly mentioned in the Vedic tradition as an ancestor!

6. The Great Bath Mystery of Mohenjodaro

One of the large buildings from Mohenjodaro, a site in Sindh, has been identified as the Great Bath. But we don’t really know if the structure was used for religious rituals, as a bathing pool for the royal family, or for some other purpose altogether!

Read more about the Harappan Civilization and Mohenjodaro

These ancient toilets of Indus Valley Civilization came equipped with a ‘lota’ for washing up. Though Indians no longer use the same toilet., with the design in their homes, the Lota has survived in Indian toilets!

If you have lived in a Metro or any major city in India you can literally write a thesis on traffic jams. We all get stuck in a traffic jam but traffic jams aren’t exactly a recent phenomenon!

The French traveler Tavernier spoke of how seventeenth-century Indian highways were clogged by bullock-cart caravans that could have as many as 10,000–12,000 oxen. When two such caravans met on a narrow road, there would be a traffic jam that could take two or three days to clear! The Harappan highways in those times would have been quite similar.

9. Rann of Kutch was Estuary of A Great River

The Rann of Kutch has a very strange marshy landscape. This is partly due to the fact that it was once the estuary of a great river. Much of it is now dry desert but satellite photographs show that there is still a substantial amount of underground water along the old channels.

Wells, even drilled at shallow depths, give freshwater in the middle of the Thar Desert!

Even though the Saraswati dried up eventually, it has not been forgotten. Modern Hindus still worship the Saraswati as the Goddess of Knowledge and the ‘inspirer of hymns’.

In Haryana, one of the seasonal tributaries of the Ghaggar is called the Sarsuti. Farther south, a seasonal river called Saraswati rises in the Aravallis and flows into the Rann of Kutch, not far from the estuary of the lost river. In the deserts of Rajasthan, the Pushkar lake recalls many legends about Goddess Saraswati. And where the Yamuna joins the Ganga at Allahabad, legend says that the Saraswati flows underground.

We call know that India is called Bharat or Bharatvash, derived from the name of king Bharat.

However, In Malay, which is a major language of the Austronesian family spoken in Brunei, Indonesia, Malaysia and Singapore and the language of the Malays, it is spoken by 290 million people ‘Barat’ means west, which is the direction from which Indian merchants came to South East Asia!

There is plenty of evidence that links the Rig Vedic Indians to the ancient Persians. The Avesta, the oldest and most sacred text of the Zoroastrians, is written in a language that is almost identical to that of the Rig Veda.

The older sections of the Avesta—called the Gathas—are said to have been composed by the prophet Zarathustra himself. They can be read as Rig Vedic Sanskrit by making a minor phonetic change—the ‘h’ in Avestan is the ‘s’ in Sanskrit. A similar phonetic shift survives in the modern Indian language of Assamese!

We all know about the Yezidi people now after becoming a target of ISIS terrorists. They are a tiny religious group of about 1,50,000 people who live today among the Kurds of northern Iraq, Eastern Turkey and parts of Armenia.

Their religion is an ancient one and they were persecuted for centuries for their faith. However, there are mind-blowing similarities with Hindus. The Yezidis too believe in reincarnation and avatars, they pray facing the sun at dawn and dusk, and have a system of endogamous castes.

Their temples, you can see for yourself in the picture above, which have conical spires, look a lot like Hindu temples and the peacock plays a central role in their religion. Now, the fact states that there are no peacocks found there.

Furthermore, the Yezidi themselves believe that they came to the Middle East from India about 4000 years ago, around the time the Harappan Civilization began to disintegrate or perhaps when the Battle of the Ten Kings took place.

13. The Mahabharata Tribe in Manipur

The people of the tiny Bishnupriya community that still lives in Manipur and neighboring states trace their origin to the Mahabharata. They speak a language that is related to the Assamese and contains Tibetan-Burman words but still preserves several features of the archaic Prakrit!

Read more about Historicity of Mahabharata 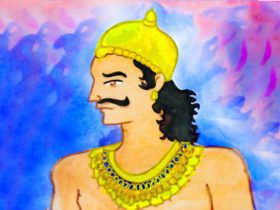